Carbon capture, utilisation and storage (CCUS) is an emissions reduction technology that can be applied across the energy system. This article describes the CCUS features in the ETM.

The user can make choices regarding the application of carbon capture, what happens to this captured carbon, how it is transported and the costs associated with it.

For each of these sectors, the user can make choices about the extent to which carbon capture technology is applied in the future energy system. The picture below gives an impression of the capture section in the ETM:

Note that the above sliders only impact the amount of CO2 captured. Separate choices have to be made about what happens with this CO2. This can be done in the utilisation and storage section. Without such assumption, any surplus of captured CO2 will be exported (any deficit will be imported).

For various industry sectors, the user can make assumptions about the captured amounts of CO2 emissions. The sliders in the model set the share of the total capture potential in a sector that is utilised. For example, if a sector emits 3 Mt of capturable emissions, a slider value of 50% means that in your scenario 1.5 Mt CO2 is captured in that sector.

The capture potential of an industrial sector depends on various aspects. First of all, it depends on the size and efficiency of the sector in the chosen area.

Thirdly, capture potentials can vary per the region chosen in the ETM. More information about the assumed potentials and sources used can be found on ETDataset.

The ETM takes into account the energy requirements of carbon capture technology. To extract CO2 from industrial process and combustion emissions, electricity and heat are needed. The amount of energy used varies per subsector and at what stage CO2 is captured.

Currently, it is assumed that all additional energy for carbon capture is electric, also for heat production.

Installing carbon capture units leads to higher investment costs, as well as higher operation and maintenance costs (O&M). In addition, the efficiency of the plant goes down to cover the additional energy required to capture the CO2. The higher O&M and lower efficiency means that the marginal costs of the plant goes up. This may affect the plant's position in the merit order of the power market and hence its number of full load hours.

The energy requirements are modelled as a lower output efficiency of the plant. This means that more coal or gas input is required to produce the same amount of electricity as a regular plant without capture unit.

CO2 capture at hydrogen production plants works in a similar way as the power sector. The main difference is that for hydrogen, plants are assumed to have fixed full load hours. In other words, there is no 'merit order' that determines which plants produces when. As such, the additional (marginal) costs caused by the capture unit do lead to higher total costs, but do not affect the number of full load hours of the plant.

The ETM assumes DAC units to run base load, i.e. with a flat hourly profile. The electricity required to run DACs is considered final demand of the energy sector. Since DAC is rather energy intensive, the net CO2 reduction depends on the emission factor of the electricity used.

Captured CO2 can be used in multiple ways. The ETM currently offers the following applications:

CO2 captured in the previous section can be stored long term ('sequestered'), typically in an underground geological formation. The ETM models offshore sequestration in empty oil or gas fields. The user can set the amount of CO2 that is stored annually.

The ETM takes into account investment costs, yearly recurring operation and maintenance costs as well as energy requirements for compressing and transporting the captured CO2 to offshore locations.

Please note: For some regions, no data could be found on storage potentials. An overview of the research used can be found on ETDataset.

Rather than storing captured CO2 (semi) permanently, it can also be re-used for various purposes. One application modelled in the ETM is the production of synthetic methanol. The user can set the amount of methanol produced in the future.

Methanol is one of the most widely used base chemicals in the chemical industry sector. For example, it is used for the production of plastics and polyester. In addition, methanol can be used as a fuel.

Synthetic methanol is made of CO2, hydrogen and electricity. The ETM takes all three into account, as well as the investment and O&M costs associated with its production.

Please note: The production of synthetic methanol does not (automatically) affect the production of methanol and other chemical products in the conventional chemical industry sector. Users can make choices about this themselves in the Demand → Industry → Chemicals section.

Similar to synthetic methanol, captured CO2 can be used to produce kerosene, which can subsequently serve as transport fuel in the aviation sector. The ETM takes the CO2, hydrogen and electricity requirements for producing kerosene into account, as well as the investment and O&M costs associated with its production.

Finally, the user can set the amount of CO2 used for 'other utilisation' purposes. This includes all applications that are currently not modelled explicitly in the ETM. Examples include utilisation of CO2 as a propellant gas for beer and soda production or for the cultivation of crops in greenhouses. CO2 emitted by the fertilizers industry sector can also be captured and used to produce urea, which is used as an animal feed additive and fertilizer.

In many cases, utilising CO2 does not reduce emission, but only delays it. Therefore, the amount of CO2 set with this slider is included in the total emissions of your scenario as a separate category (non-energetic and delayed emissions).

Supply and demand of carbon#

The ETM keeps track of all 'supply' of carbon (capture) and all 'demand' of carbon (utilisation and storage). This is summarised in the chart below: 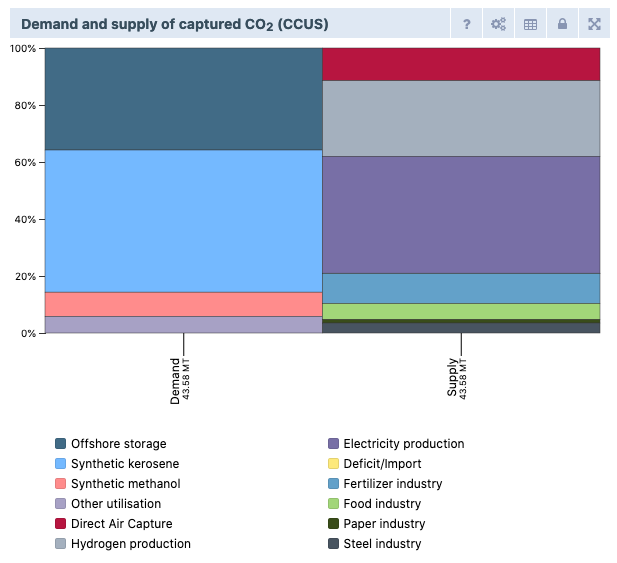 Carbon can be transported in two different ways in the ETM:

For each type of infrastructure, the user can set the share of total captured CO2 transported. The ETM takes into account the investment costs and operation and maintenance costs.

Since the ETM has limited spatial information, fixed distances and volumes per infrastructure unit are assumed. More information can be found on ETDataset.

In the Cost → CCUS costs section of the ETM, the user can make assumptions about changes in CCUS related costs in the future. By default, all CCUS related costs taken into account by the model are based on present-day cost data. This means that the ETM does not automatically assume changes in future costs for CCUS technologies, such as cost development curves.

Export users can find more information about the CCUS related CO2 flows in their scenario by opening the 'CCUS graph' in the Results → Visuals → CCUS graph section. This is a visual representation of the calculation engine of the ETM. It shows all the carbon sources and destinations taken into account by the model, as well as any 'transformations' in between (such as capture potentials).

By double clicking on any of the 'nodes' in the CCUS graph, a separate pages opens up with more detailed information, such as its 'counter-part' in the energy graph. See the Molecules page in the Contributors section of the documentation for more details.