Adding employment figures to the ETM provides the user with a new, politically relevant, quantifier of his or her scenarios. Increase of local employment is often used as an argument in favor or renewable energy, this module allows quantification of this effect and could, therefore, prove a useful handle to assess the possible energy futures with.

As a result of the limited time available for the project, the implementation has been limited to three sectors and no systematic validation of research data has been performed. The following sections and subsections have been included in the project.

The "Industry" and "Agriculture" sections have not been included in the current implementation. More limitations and known issues can be found in Appendix B.

FTE (Full Time Equivalent) employment figures have been obtained for the technologies listed in Appendix A. To this end, experts from various fields have been interviewed including Energy Matters, ENECO, KEMA and Scheepstra Duurzame Energie. Moreover, we have used literature values for well-known technologies and interviewed a fitter familiar with residential energy-related technologies.

For the converters listed in Appendix A, employment figures in man_hours have been assigned. These figures have been subdivided into the following categories

As we are primarily interested in local employment, we have tried to quantify for every step which fraction of the above categories is carried out in The Netherlands. For the production phase, for instance, this fraction is often estimated to be zero (parts for resistive heaters are typically produced in cheap-labor countries).

Employment figures in the categories mentioned above in the "Research" section have been associated with the technologies in the ETM. Moving a slider of a technology instantaneously changes the net employment of the current scenario visible in the flexible dashboard item shown in Figure 2.

For technologies that feature in a ‘share’ group such as the space heating and hot water converters in households, an improved number-of-units calculation can be implemented. This has been done for these two share groups.

There are several issues related to this improvement, however:

For insulation of households, the employment is calculated analogously to costs. Based on the Rc value (equivalently: slider position) of the houses, a combination of insulation improvements is assumed. These improvements have a cost associated with them. We have added man-hours in precisely the same way, using standardized installation guides. More details can be found on the Insulation page. 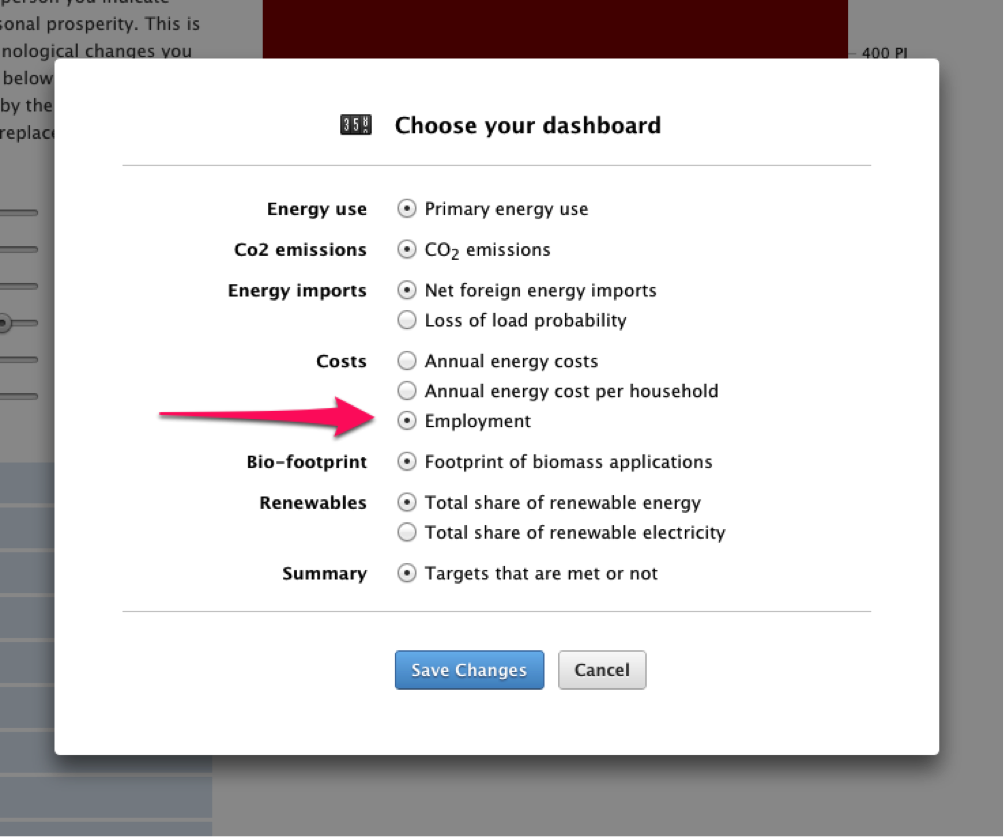 Information about employment is accessible by either

The dashboard item can be selected by clicking "change" on the ETM dashboard and selecting "Employment" from the pop-up menu shown in Figure 1.

Moving the slider associated with a technology (included in the project scope) instantaneously changes the net employment of the current scenario visible in the flexible dashboard item shown in Figure 2.

The "Employment" (Costs → Employment) is shown in Figure 3. It shows a graph of the total employment per year in the start-year and the end-year (left and right respectively), subdivided in the previously mentioned categories. The units are in kFTE (1000 Full Time Equivalents which taken to be 1800 man hours per year). The three sliders give the user the opportunity to change the values of three poorly known factors:

Overview of technologies included in the employment calculations are given in the table below. Columns show name, and employment figures for four phases: "planning", "placement", "maintenance" and "removal/replacement".

The following issues are present in the current release and will be fixed in the next releases.