Always-on battery parks represent some kind of always-on electricity producer which is connected to the HV network via a capacity-limited interconnect. When the output of the producer exceeds the capacity of the interconnect, the energy is instead diverted into a battery. When the battery also has insufficient capacity – or no volume remaining – the electricity is curtailed.

Setting up a battery park​

A battery park requires five nodes to be added to the graph:

All edges between nodes are reversed share edges, except that from the battery to wasted storage which should be inversed_flexible.

The "Wasted storage" node does not need to be unique to the battery park; many parks may share the same node. 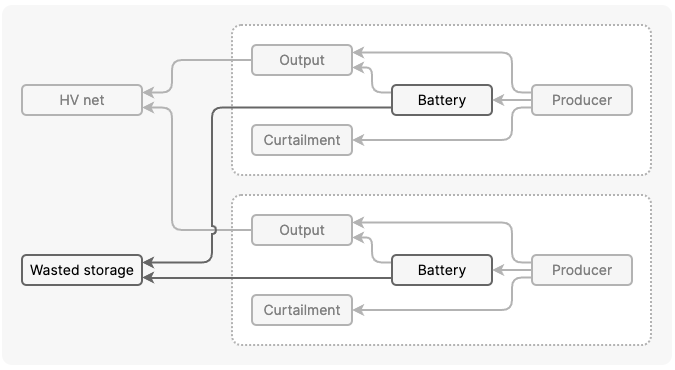 All attributes are required.

The output node must have an electricity_output_capacity attribute which specifies how much energy can flow between it and the HV network each hour (in MW):

The following data can be expected after the merit order has run.

Change the amount of storage​

Alternatively, you may choose to set a non-zero volume in the node file and change the storage node's number_of_units attribute.

Change the capacity of the output to network connection​