In the Energy Transition Model, electricity storage technologies will charge and discharge whenever it is cost-effective for them to do so. These technologies are governed by a willingness to pay – the price they are willing to pay to store electricity – and a willingness to accept – the price they are willing to accept for discharging stored energy. This price-based behaviour is described in detail in the electricity storage documentation.

While this ensures that electricity storage technologies will not charge and discharge in such a way as would result in a loss, fixed prices can be inflexible and unrealistic. For example, setting a price suitable for winter months when prices tend to be higher, may result in behavior which is less suitable for the summer months.

Electricity storage technologies have an optional forecasting option. When enabled, the technology is no longer controlled by the market price of electricity, but will instead forecast the electricity load for the year and decide when to charge and discharge accordingly.

In this mode, the goal of a storage technology is to flatten the residual load curve as much as possible. This also generally increases the profitability of the technology.

The residual load curve is the sum of demand in each hour, minus the sum of supply from must-run and volatile producers. This results in a curve describing the "residual load" for each hour in the year.

Whenever the value for an hour is positive, electricity demand is not fully satisfied by must-run and volatile producers, with dispatchable/flexible sources needed to meet demand. If the value is negative, this indicates a surplus of energy.

The forecasing algorithm matches an hour of high residual load with an hour of low or negative load from the preceeding 72-hours. It causes the electricity storage technology to charge when load is low and discharge the same amount when load is high. This has the effect of flattening the residual load curve, reducing peaks in favor of a more constant curve.

The algorithm accounts for the input and output capacity, the total volume, and the efficiency of the storage technology.

Here we have a curve which varies gradually from a minimum value of 1 up to a maximum of 6. The algorithm selects hour 8 (orange) as the hour of highest load, and finds the hour of lowest load (green).

The algorithm continues selecting high and low hours until the storage technology is at full capacity in each hour or, more often, there are no opportunities to flatten the curve further without a high likelihood of incurring losses. 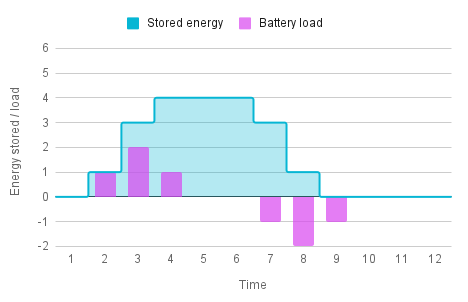 Why is the charge/discharge cycle limited to a 72-hours?​

After selecting an hour of high load, the algorithm looks for an opportunity to charge in the 72-hour period before the high load. This limit serves several purposes:

During experimentation with the algorithm, it was found that periods longer than 72-hours quickly resulted in diminishing returns. Profits from storage technologies did not increase significantly, while calculation time increased unnacceptably.

Note that this does not mean that the battery must fully charge and discharge every 72-hours. Rather, any amount of energy charged in one hour – which may be a fraction of the battery capacity or volume – must be discharged within 3 days.

What are the specifications for batteries in the ETM?​

To view the specifications for an electricity storage technology, click the (?) icon next to the slider, then "Technical and financial properties". This will show you a screen summarizing the total installed capacity and volume, efficiency, and costs of the technology. 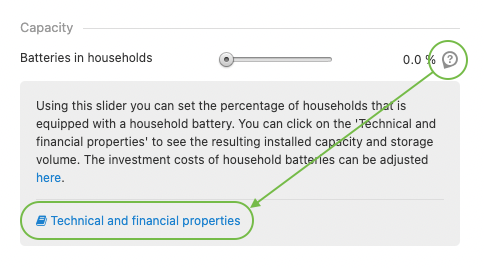