The ETM supports so-called 'negative' emissions. Negative emissions arise when more CO2 is drawn from the ambient air than is added to it. In the ETM, there are two ways to bring about negative emissions:

Below, both routes are explained in more detail.

Using biomass to extract bioenergy, for example for the production of electricity and hydrogen, and subsequently capturing and storing the CO2 emissions released in this process may result in a net decrease in atmospheric CO2 levels. This is typically referred to as BECCS: bio-energy with carbon capture and storage.

The reasoning behind BECCS is as follows: Biomass grows by drawing CO2 from the atmosphere. Extracting bioenergy from biomass releases this CO2 again. However, when this CO2 is captured and stored, CO2 initially extracted from the atmosphere does not re-enter the atmosphere, leading to net decrease in atmospheric CO2 levels.

The IPCC estimates the global potential of negative emissions from BECCS between 0 to 22 gigatonnes per year.

Direct Air Capture (DAC) is a process of capturing CO2 directly from the ambient air using electricity. If the electricity used is renewable, storing the captured CO2 can lead to a net decrease in atmospheric CO2 levels. The captured CO2 can also be used for the production of carbon neutral fuels.

Direct Air Capture is a promising technology to bring down global CO2 levels in the atmosphere. However, it is also an energy intensive process. Since CO2 in the ambient air is 'available' everywhere in the world, DAC capacity is likely to be installed in areas that will have very low (renewable) power costs.

Negative emissions are incorporated in the CO2 calculation in the following way:

The chart below shows an example of future net negative emissions in the households and buildings sector. This is achieved by large electrification in those sectors, combined with a power production mix that leads to a negative emission factor for electricity. The red target line shows the net total emissions in this scenario, which is the sum of all positive and negative sector emissions. 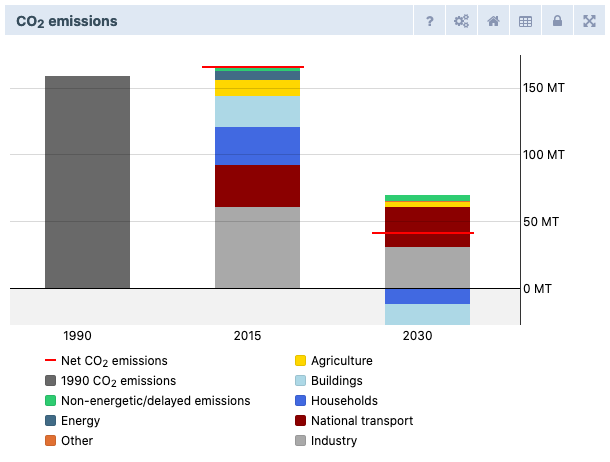